Faithful representation is a fundamental characteristic of useful information within the IASB’s Conceptual framework for financial reporting.

Which of the following accounting treatments correctly applies the principle of faithful representation?

A.Reporting a transaction based on its legal status rather than its economic substance

B.Excluding a subsidiary from consolidation because its activities are not compatible with those of the rest of the group

C.Recording the whole of the net proceeds from the issue of a loan note which is potentially convertible to equity shares as debt (liability)

D.Allocating part of the sales proceeds of a motor vehicle to interest received even though it was sold with 0% (interest free) finance

Which of the following statements relating to intangible assets is true?

A.All intangible assets must be carried at amortised cost or at an impaired amount; they cannot be revalued upwards

B.The development of a new process which is not expected to increase sales revenues may still be recognised as an intangible asset

C.Expenditure on the prototype of a new engine cannot be classified as an intangible asset because the prototype has been assembled and has physical substance

Each of the following events occurred after the reporting date of 31 March 2015, but before the financial statements were authorised for issue.

Which would be treated as a NON-adjusting event under IAS 10 Events After the Reporting Period?

A.A public announcement in April 2015 of a formal plan to discontinue an operation which had been approved by the board in February 2015

B.The settlement of an insurance claim for a loss sustained in December 2014

C.Evidence that $20,000 of goods which were listed as part of the inventory in the statement of financial position as at 31 March 2015 had been stolen

The plant is used to manufacture a specific product which has been suffering a slow decline in sales. Metric has estimated that the plant will be retired from use on 31 March 2017. The estimated net cash flows from the use of the plant and their present values are:

At what value should the plant appear in Metric’s statement of financial position as at 31 March 2015?

Pact acquired 80% of the equity shares of Sact on 1 July 2014, paying $3·00 for each share acquired. This represented a premium of 20% over the market price of Sact’s shares at that date.

The only fair value adjustment required to Sact’s net assets on consolidation was a $20,000 increase in the value of its land.

What would be the carrying amount of the non-controlling interest of Sact in the consolidated statement of financial position of Pact as at 31 March 2015?

The IASB’s Conceptual framework for financial reporting defines recognition as the process of incorporating in the financial statements an item which meets the definition of an element and satisfies certain criteria.

Which of the following elements should be recognised in the financial statements of an entity in the manner described?

A.As a non-current liability: a provision for possible hurricane damage to property for a company located in an area which experiences a high incidence of hurricanes

C.As a trade receivable: an amount of $10,000 due from a customer which has been sold (factored) to a finance company with no recourse to the seller

D.In revenue: the whole of the proceeds from the sale of an item of manufactured plant which has to be maintained by the seller for three years as part of the sale agreement

Which of the following transactions would increase Jasim’s gearing compared to what it would have been had the transaction NOT taken place?

Gearing should be taken as debt/(debt + equity). Each transaction should be considered separately.

A.During the year a property was revalued upwards by $20,000

B.A bonus issue of equity shares of 1 for 4 was made during the year using other components of equity

C.A provision for estimated damages was reduced during the year from $21,000 to $15,000 based on the most recent legal advice

Germane has a number of relationships with other companies.

In which of the following relationships is Germane necessarily the parent company?

(i) Foll has 50,000 non-voting and 100,000 voting equity shares in issue with each share receiving the same dividend. Germane owns all of Foll’s non-voting shares and 40,000 of its voting shares

(ii) Kipp has 1 million equity shares in issue of which Germane owns 40%. Germane also owns $800,000 out of $1 million 8% convertible loan notes issued by Kipp. These loan notes may be converted on the basis of 40 equity shares for each $100 of loan note, or they may be redeemed in cash at the option of the holder

(iii) Germane owns 49% of the equity shares in Polly and 52% of its non-redeemable preference shares. As a result of these investments, Germane receives variable returns from Polly and has the ability to affect these returns through its power over Polly

At what amount will the office building be shown in Tibet’s statement of financial position as at 31 March 2015? $’000

To which of the following items does IAS 41 Agriculture apply?

(iii) Farm land which is used for growing vegetables

1
On 1 July 2014 Bycomb acquired 80% of Cyclip’s equity shares on the following terms:– a share exchange of two shares in Bycomb for every three shares acquired in Cyclip; and– a cash payment due on 30 June 2015 of $1·54 per share acquired (Bycomb’s cost of capital is 10% per annum).At the date of acquisition, shares in Bycomb and Cyclip had a stock market value of $3·00 and $2·50 each respectively.Statements of profit or loss for the year ended 31 March 2015: 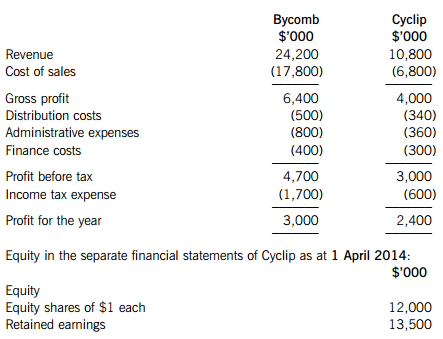 The following information is also relevant:(i) At the date of acquisition, the fair values of Cyclip’s assets were equal to their carrying amounts with the exception of an item of plant which had a fair value of $720,000 above its carrying amount. The remaining life of the plant at the date of acquisition was 18 months. Depreciation is charged to cost of sales.(ii) On 1 April 2014, Cyclip commenced the construction of a new production facility, financing this by a bank loan. Cyclip has followed the local GAAP in the country where it operates which prohibits the capitalisation of interest. Bycomb has calculated that, in accordance with IAS 23 Borrowing Costs, interest of $100,000 (which accrued evenly throughout the year) would have been capitalised at 31 March 2015. The production facility is still under construction as at 31 March 2015.(iii) Sales from Bycomb to Cyclip in the post-acquisition period were $3 million at a mark-up on cost of 20%. Cyclip had $420,000 of these goods in inventory as at 31 March 2015.(iv) Bycomb’s policy is to value the non-controlling interest at fair value at the date of acquisition. For this purpose Cyclip’s share price at that date can be deemed to be representative of the fair value of the shares held by the non-controlling interest.(v) On 31 March 2015, Bycomb carried out an impairment review which identified that the goodwill on the acquisition of Cyclip was impaired by $500,000. Impaired goodwill is charged to cost of sales.Required:(a) Calculate the consolidated goodwill at the date of acquisition of Cyclip. (6 marks)(b) Prepare extracts from Bycomb’s consolidated statement of profit or loss for the year ended 31 March 2015, for:(i) revenue;(ii) cost of sales;(iii) finance costs;(iv) profit or loss attributable to the non-controlling interest.The following mark allocation is provided as guidance for this requirement:

2
Yogi is a public company and extracts from its most recent financial statements are provided below: 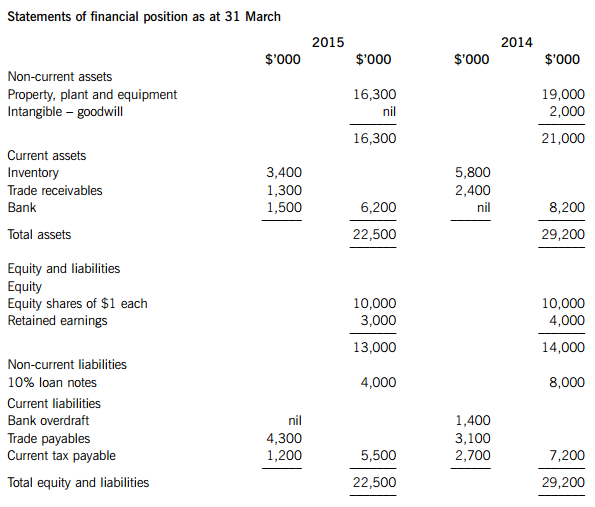 Notes(i) On 1 April 2014, Yogi sold the net assets (including goodwill) of a separately operated division of its business for $8 million cash on which it made a profit of $1 million. This transaction required shareholder approval and, in order to secure this, the management of Yogi offered shareholders a dividend of 40 cents for each share in issue out of the proceeds of the sale. The trading results of the division which are included in the statement of profit or loss for the year ended 31 March 2014 above are:

(ii) The following selected ratios for Yogi have been calculated for the year ended 31 March 2014 (as reported above): 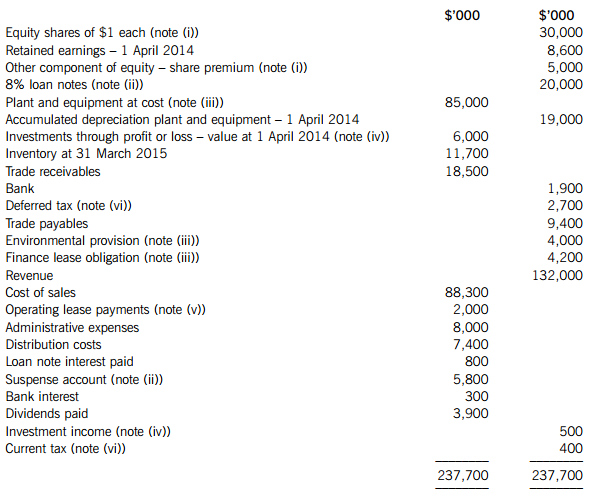 The following notes are also relevant:(i) The equity shares and share premium balances in the trial balance above include a fully subscribed 1 for 5 rights issue at $1·60 per share which was made by Clarion on 1 October 2014. The market value of Clarion’s shares was $2·50 on 1 October 2014.(ii) On 31 March 2015, one quarter of the 8% loan notes were redeemed at par and six months’ outstanding loan interest was paid. The suspense account represents the double entry corresponding to the cash payment for the capital redemption and the outstanding interest.(iii) Property, plant and equipment:Included in property, plant and equipment are two major items of plant acquired on 1 April 2014:Item 1 had a cash cost $14 million, however, the plant will cause environmental damage which will have to be rectified when it is dismantled at the end of its five year life. The present value (discounting at 8%) on 1 April 2014 of the rectification is $4 million. The environmental provision has been correctly accounted for, however, no finance cost has yet been charged on the provision.Item 2 was plant acquired with a fair value of $8 million under a five-year finance lease. This required an initial deposit of $2·3 million and annual payments of $1·5 million on 31 March each year. The finance lease obligation in the trial balance above represents the fair value of the plant less both the deposit and the first annual payment. The lease has an implicit interest rate of 10% and the asset has been correctly capitalised in plant and equipment.No depreciation has yet been charged on plant and equipment which should be charged to cost of sales on a straight-line basis over a five-year life (including leased plant). No plant is more than four years old.(iv) The investments through profit or loss are those held at 31 March 2015 (after the sale below). They are carried at their fair value as at 1 April 2014, however, they had a fair value of $6·5 million on 31 March 2015. During the year an investment which had a carrying amount of $1·4 million was sold for $1·6 million. Investment income in the trial balance above includes the profit on the sale of the investment and dividends received during the year.(v) Clarion renewed an operating lease on a property on 1 April 2014. The operating lease payments represent an annual payment (in advance) of $1 million and a lease premium of $1 million. The lease is for four years and operating lease expenses should be included in cost of sales.(vi) A provision for current tax for the year ended 31 March 2015 of $3·5 million is required. The balance on current tax in the trial balance above represents the under/over provision of the tax liability for the year ended 31 March 2014. At 31 March 2015, the tax base of Clarion’s net assets was $12 million less than their carrying amounts. The income tax rate of Clarion is 25%.Required:(a) Prepare the statement of profit or loss for Clarion for the year ended 31 March 2015.(b) Prepare the statement of changes in equity for Clarion for the year ended 31 March 2015.(c) Prepare the statement of financial position for Clarion as at 31 March 2015.Notes to the financial statements are not required.The following mark allocation is provided as guidance for these requirements:(a) 10 marks(b) 3 marks(c) 10 marks (23 marks)(d) Calculate the basic earnings per share of Clarion for the year ended 31 March 2015. (3 marks)(e) Prepare extracts from the statement of cash flows for Clarion for the year ended 31 March 2015 in respect of cash flows from investing (ignore investment income) and financing activities. (4 marks)
相关试卷
2016年9月ACCA F7考试真题及答案
38人已考
2016年3月6月ACCA F7考试真题及答案
17人已考
2015年12月ACCA F7考试真题及答案(国际)
13人已考
2015年6月ACCA F7考试真题及答案(国际)
21人已考
2014年6月ACCA F7考试真题及答案(国际)
22人已考
2012年12月ACCA F7考试真题及答案(国际)
14人已考
最新试卷
2016年9月ACCA F7考试真题及答案
38人已考
2016年3月6月ACCA F7考试真题及答案
17人已考
2015年12月ACCA F7考试真题及答案(国际)
13人已考
2015年6月ACCA F7考试真题及答案(国际)
21人已考
2014年6月ACCA F7考试真题及答案(国际)
22人已考
2012年12月ACCA F7考试真题及答案(国际)
14人已考